16:46 Ameriabank wins Best Bank in Sustainable Finance award for 2022 13:24 Ameriabank awarded with TFP Prize for Deal of the Year 2021: Green Trade by EBRD 14:02 Global Finance names Ameriabank Best Bank in Armenia in 2022 14:45 Ameriabank’s ‘Live Armenian,’ ‘Live with a Smile,’ ‘Live Limitless’ promotional draws’ winners are announced 15:45 Global Finance Names Ameriabank “Best Investment Bank” in Armenia 10:44 Ameriabank receives another IFC award in trade-finance sector 11:50 Ameriabank is the first in Armenia to place green bonds via public offering 11:46 "You can create systems, but they must be based on people, be people-centered," says Lindsey Forbes, Ameriabank Board Member 17:01 Ameriabank is the largest taxpayer among Armenian banks according to results of year 2021 17:08 EBRD and donors increase funding for SMEs in Armenia
17:58 - 25/March/2021 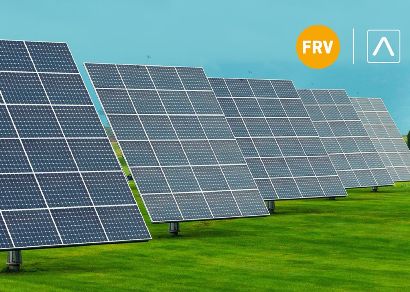 FRV has reached financial close with IFC, EBRD, and Ameriabank for the largest Utility Scale Solar Power Plant in Armenia.

55 MW Masrik-1 Solar Farm will produce enough clean energy to supply more than 20,000 homes and avoid the emission of over 40,000 tons of CO annually.
The project signed a Power Purchase Agreement (PPA) with Electric Networks of Armenia which will distribute the electricity produced by the plant delivering significant benefits to the community.

Yerevan, Armenia, March 23th, 2021
Fotowatio Renewable Ventures (FRV), part of eAbdul Latif Jameel Enrgy and a leading global developer of renewable energy projects, has closed the financing agreement for the development of the largest utility-scale solar power plant in Armenia. Located in Mets Masrik municipality, Gegharkunik region, the 55 MW solar power plant is the first-of-its-kind in the country, and it will help boost Armenia’s supply of renewable energy while reducing its dependence on fossil fuels.

In 2018, FRV and the Ministry of Territorial Administration and Infrastructure signed a Government Support Agreement (GSA) to design, finance, build, own and operate the solar power plant with the support of the Renewable Resources and Energy Efficiency (R2E2) Fund, the implementation agency authorized by the Government of Armenia.

“Masrik-1” solar power plant will generate more than 128 gigawatt-hours of electricity annually at a competitive tariff of 41,9 USD/MWh. The electricity will be sold under a power purchase agreement to Electric Networks of Armenia, the utility company responsible for distribution of electricity in the country. The plant will produce enough energy to supply more than 20,000 Armenian households and is projected to avoid the release of over 40,000 tons of carbon emissions annually.

The project is supported by the International Finance Corporation (IFC), a member of the World Bank Group, the European Bank for Reconstruction and Development (EBRD) and the European Union (EU). They will extend up to USD 38.4 million financing structured in different tranches of debt. Ameriabank will provide AMD loan facility to finance company’s VAT needs.

“Armenia has great potential when it comes to the development of renewable energy, in particular solar energy” said Tristán Higuero, Chief Operations Officer of FRV. “The financial close of our first solar project in the region is a milestone for FRV as it allows us to expand our reach worldwide. Through this project, we will contribute to the country’s sustainable economic growth through the generation of wealth and employment, helping to build a more sustainable future”.

Artak Hanesyan, Ameriabank’s Chairman of the Management Board-CEO, highlighted the importance of the project and said that the renewable energy projects are a priority for the Bank: “We support international business in Armenia and have prioritized this project for its role in economic development, addressing environmental issues, creation of new job opportunities and improvement of the living standards in our country. We provided a loan to support development of the largest utility-scale solar power plant thus contributing to formation of a more independent and secure power system in Armenia”.

According to Artak Hanesyan, Ameriabank has been actively supporting the Energy sector in the country through financing of hydropower plant (HPP) and solar power plant (SPP) projects: “Masrik-1 solar power plant is yet another daring and critical project for our country which, I am sure, will be a success due to our joint efforts”.

Fady Jameel, Deputy President & Vice Chairman of Abdul Latif Jameel, said “Abdul Latif Jameel Energy, through FRV, is providing Armenia’s largest utility scale solar plant which is a testament to our commitment to developing the renewable energy sector. In finalizing this financial agreement for Masrik Solar Farm, we move closer towards our objectives and take pride in assisting Armenia’s shift towards a renewable future.

2022-05-18 13:24:21 Ameriabank’s project on saving water and energy resources, implemented jointly with Banca Popolare di Sondrio (Italy), has been recognized as the Deal of the Year 2021: Gr...
Global Finance names Ameriabank Best Bank in Armenia in 2022

2022-04-05 14:02:48 Ameriabank has been named Best Bank in Armenia in 2022 by Global Finance, a leading magazine specializing in coverage of international finance sector. The announcement has come ...
Ameriabank’s ‘Live Armenian,’ ‘Live with a Smile,’ ‘Live Limitless’ promotional ...

2022-03-31 14:45:49 Ameriabank on Wednesday summed up the promotional draws “Live Armenian”, “Live with a Smile” and “Live Limitless” and announced the results. ...
Global Finance Names Ameriabank “Best Investment Bank” in Armenia

2022-02-22 10:44:28 Ameriabank CJSC has been named the Best Issuing Bank in the Caucasus for 2021 by International Financial Corporation (IFC), a member of the World Bank Group, in the 10th annual ...
Ameriabank is the first in Armenia to place green bonds via public offering

2022-02-15 11:50:17 Ameriabank announced today public placement of nominal, coupon, book-entry bonds with the total volume of USD 8 million and AMD 3 billion during the period from February 14 to A...
"You can create systems, but they must be based on people, be people-centered," ...

2022-02-14 11:46:45 Lindsey Forbes, an Ameriabank Board Member and a representative of the European Bank for Reconstruction and Development, has over 35 years of experience in commercial and invest...
Ameriabank is the largest taxpayer among Armenian banks according to results of ...

2022-01-25 17:01:47 According to the data of January-December, 2021, Ameriabank is the largest taxpayer among Armenian banks. It paid taxes to the state budget for the total amount of AMD 8.9 bln ...
EBRD and donors increase funding for SMEs in Armenia