Businessman and philanthropist Ruben Vardanyan believes that Armenia can become a new “Hong Kong” for Iran. 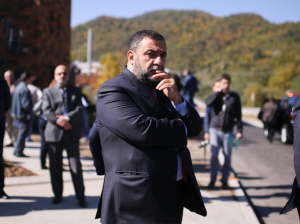 Businessman and philanthropist Ruben Vardanyan believes that Armenia can become a new “Hong Kong” for Iran.

Vardanyan is the co-founder of IDeA Charitable Foundation that implements large-scale projects in Armenia. In an interview with Mediamax, he remarked that lifting of sanctions against Iran would undoubtedly open new opportunities for Armenia.

“I’ve said time and again that Armenia should become a regional hub take into account its geographical position and centuries-old entrepreneurship traditions at the crossroads of different cultures and civilizations. Iran will be gradually “opening” to the world, and that situation justifies Armenia becoming such hub even further,” said the businessman.

Vardanyan praised the membership of Armenian in the Eurasian Economic Union and advanced trade relations with European Union as additional competing advantages for the country.

“Within the next few years, lots of foreign businessmen and specialists will be working in Iran; with characteristics of life in Iran in mind, many will not take their families with them. Armenia’s geographical proximity to Iran and the possibility to fly there and back on weekend should make us think of creating comfortable conditions for wives and children of foreign businessmen to live in Armenia while the head of family is working in Iran,” he said.

One of Vardanyan’s biggest projects in Armenia is UWC Dilijan College, attended by about 200 students from 60 countries.

According to Vardanyan, new opportunities will arise in tourism as well.

“In the last few years, we’ve seen the sustained increase in number of tourists visiting particularly southern regions of Armenia. Development of new touristic routes and products will allow foreigners to continue traveling from Armenia to Iran,” noted the philanthropist.

Vardanyan’s another important project is the reconstruction of Tatev monastery in the south of Armenia. Five years ago world’s largest “Wings of Tatev” reversible aerial ropeway was launched within “Tatev Revival” project. It is included in Guinness book of records.

2016-02-04 11:36:04 After a meeting with Iran's Oil Minister Bijan Namdar Zanganeh in Tehran the Minister of Petroleum of Venezuela, Eulogio Del Pino, said that six crude oil producing countries ha...
Where can money for social benefits be found in crisis? (video)

2016-02-04 10:37:06 Russians were shocked recently by news about the upcoming July referendum in Switzerland, where citizens of the country will discuss the idea of granting 2250 euros to all citiz...
Newsfeed