Waymo, in an attempt to undercut Uber’s claims that its technology for lidar sensors is completely different from its rival’s designs, said in a court filing Friday that Uber is engaged in a “cover up" of its trade secret theft. 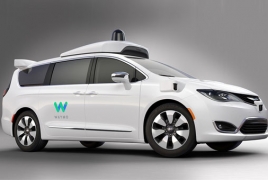 Waymo says it’s uncovered new evidence that Uber Technologies Inc. took and copied its trade secrets and urged a judge to bar the head of the ride-hailing company’s driverless car program from continuing to work on the project, Bloomberg reports.

Alphabet Inc.’s Waymo made the request Friday, April 21 as a federal judge weighs whether to issue a court order that may impede Uber in the race to market autonomous-driving vehicles. U.S. District Judge William Alsup in San Francisco said last month that Waymo has a strong case that its former engineer, Anthony Levandowski, downloaded thousands of confidential files before he left the company to launch his own self-driving startup, Otto, that was acquired by Uber for $680 million.

“Putting somebody into quarantine from a program of product development is not unheard of at all," Pooley said.

Waymo, in an attempt to undercut Uber’s claims that its technology for lidar sensors is completely different from its rival’s designs, said in a court filing Friday that Uber is engaged in a “cover up" of its trade secret theft.

Waymo said it has “finally learned” of a project designed by Levandowski while he was in possession of Waymo’s files. Uber has hidden the code-named design from the court, according to the filing. The name is redacted in the filing.

“They were hiding a device," Waymo wrote, “which Uber only revealed to Waymo after one of its engineers was forced to admit it existed."

Uber spokesman Matt Kallman said the code-named device was an abandoned project that never reached a prototype. Far from keeping it secret, Uber made it available to Waymo to inspect and photograph as part of court-ordered information sharing, he said. Waymo’s emphasis on the unnamed device represents a strategic pivot by Waymo and a retreat from its original claims, he said.

Uber is fighting the case so far without testimony from Levandowski, who wasn’t named as a defendant, but has said he’s at risk of being criminally prosecuted and has asserted his constitutional right to protect himself from self-incrimination.

Uber has argued that it had put in place a lidar project before Levandowski joined the company and that he wasn’t involved in its design.