The Sasna Tsrer armed group took over of a police patrol regiment building in Yerevan, took hostages, but later surrendered, in July 2016. 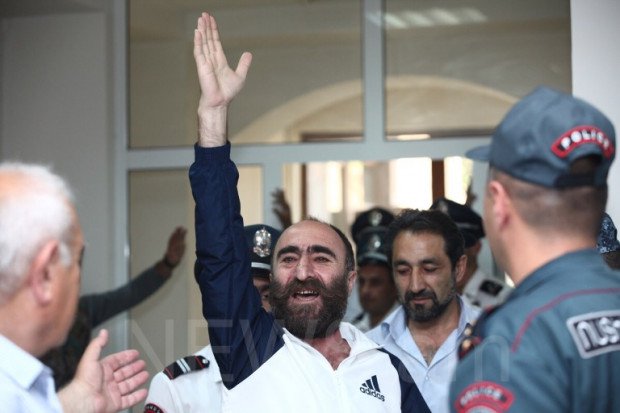 Court hearing of the detached part of the case into the Sasna Tsrer armed group adjourned before even getting started Thursday in Yerevan, the capital city of Armenia.

The Armenian News-NEWS.am reporter at the scene informed that the presiding judge said if those in attendance did not remain silent, he will adjourn the hearing.

The defendants, however, got angry and shouted: “You can’t silence the voice of the people; our voices shall sound louder than yours!”

Subsequently, a shoving match broke out in the courtroom, and people continued shouting.

And the judge announced that the next hearing will be slated for June 21 and left the courtroom.

The Sasna Tsrer armed group took over of a police patrol regiment building in Yerevan, took hostages, but later surrendered, in July 2016.

2017-06-30 13:27:02 On June 28 the member of Sasna Tsreer group Arayik Khandoyan was beaten and tortured in the court house. His face is bruised, there are bad injuries on his legs. The policemen h...
Newsfeed