The Minister made a next stop in Khachik village. There was signed a trilateral agreement on nature protection among WWF Armenia, Gnishik Intercommunity Environmental Fund and Khacik community. Due to the cooperation, agricultural machinery and over 4000 seedlings were handed to the community, which will be alternative income source. 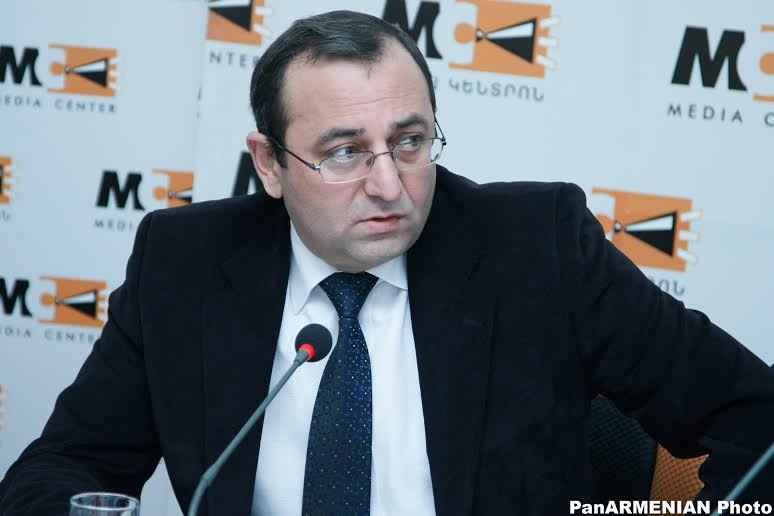 RA Ministry of Nature Protection Artsvik Minayan participated in a number of environmental events conducted in Vayoc Dzor Region within the framework of ''Community- based Models for Biodiversity Protection in Ecological Corridors'' project. The visit to the region started with the opening ceremony of Agricultural and Veterinary Service Centre in Yeghegnadzor.

Additionally, the official event was attended by Vayoc Dzor Region Governor Harutyun Sargsyan, Deputy Ambassador of the Federal Republic of Germany to Armenia Nadia Lichtenberger, WWF Armenia Director Karen Manvelyan, Director of the Centre for Agribusiness and Rural Development (CARD) Foundation Gagik Sardaryan and etc. The centre was established by WWF-Armenia alongside Agribusiness and Rural Development (CARD) Foundation supported by the Federal Republic of Germany as well as through the direct participation of the RA Ministry of Nature Protection.

Congratulating on the occasion of the newly opened centre, Minster Artsvik Minasyan stated, that the new centre will enable reducing impact on natural resource utilization thus addressing several environmental issues. More than four dozen communities may take advantage of the centre services; the latter will deliver various sector services for farm business development, by linking the farmers with international organizations, equipped with up-to-date techniques of veterinary and artificial insemination. The centre will also realize educational function: Armenian and foreign specialists will organize seminars and trainings.

The Minister made a next stop in Khachik village. There was signed a trilateral agreement on nature protection among WWF Armenia, Gnishik Intercommunity Environmental Fund and Khacik community. Due to the cooperation, agricultural machinery and over 4000 seedlings were handed to the community, which will be alternative income source.

Artsvik Minasyan attributed value to the works focused on biodiversity protection and community development, emphasized, that the latter will increase social and economic benefits by the communities by dint of biodiversity. According to the Minister, aid allocated to the community as well as thrift use of lands will promote establishing ecological corridors accomplished with the support of German Government via “Establishment of Community-based Models for Biodiversity Protection in Ecological Corridors in the Southern Caucasus (Armenia)” project.

“By launching this program, we start undertaking practical implementation of the policy for ecological corridors so that particularly the fauna will be able to move freely through ecological corridors under our rich biodiversity conditions. It means, that the communities located in this area, should have an opportunity on one hand not causing damage to the fauna and on the other hand they make use of this, whereas finding own income sources using various development courses, including establishing new forests, which will not only change the climate conditions in Khachik community, but also will give the resources to the residents of Khachik community to utilize forest goods as the sustainable source of their income”: stated the Minister.

Artsvik Minasyan conducted a visit to “Gnishik” Protected Landscape. Envisaged plan of actions in specially protected areas of nature and maintenance works of the fauna and flora species registered in the Red Book of the Republic of Armenia were submitted to the Minister, watched the movements of bezoar goats by the observatory. Afterwards, the Minister of Nature Protection responded to the questions of the representatives of the mass media, notably reflecting upon a great deal of environmental problems together with issues related to the status of specially protected areas of nature and inspection reforms.

2017-04-25 13:15:20 Armenia’s Lake Gosh today looks like a large pool of muck. The Vendor company has brought in heavy construction equipment into the Dilijan National Park, widening the roa...
Opinion: At Lydian, Skills to Persuade are More Important than Professional Expe...

2017-04-25 13:10:32 During the meeting in Gndevaz held on the 6th of April, Lydian company’s “specialist” from South Africa, metallurgical manager John Fourie announced that cyani...
World Bank loans pushing for “war” on water

2016-05-30 11:54:25 In 2013 World Bank provided around 30 million USD as a loan to Republic of Armenia for improving its irrigation systems. The loan was provided under the condition to repay it wi...
Julia Roberts Just Taught Me More In 2 Minutes Than Anyone Else Has Done In A Li...

2016-02-06 12:46:21 Julia Roberts may not have made headlines in a while, but her latest role in a deeply moving, conservationist video may just be the best in her career and it’s definitely ...
Ozone hole forms over the UK

2016-02-05 12:46:30 For the past week, sky watchers in the UK have witnessed a rare apparition of polar stratospheric clouds (PSCs). Normally restricted to the Arctic Circle, the fantastically colo...
Newsfeed