Sargsyan: New projects, ideas will be born in Armenian-Japanese cooperation

Also, the president stated that bilateral relations have developed successfully over the course of the 25 years since the establishment of diplomatic relations between Armenia and Japan. 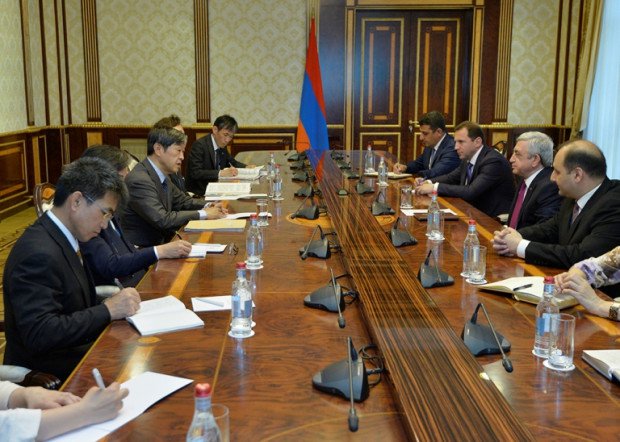 The President of Armenia, Serzh Sargsyan, on Wednesday received the president of the Japan International Cooperation Agency (JICA), Shinichi Kitaoka.

First, Sargsyan expressed the hope that new projects and ideas aimed at Armenian-Japanese cooperation will be born as a result of the Japanese guest’s visit to Armenia, the press office of the President informed Armenian News-NEWS.am.

Also, the president stated that bilateral relations have developed successfully over the course of the 25 years since the establishment of diplomatic relations between Armenia and Japan.

Subsequently, the Armenian President and the JICA chief spoke about the avenues for the development of collaboration in several domains, and expressed readiness to expand cooperation.

Kitaoka, for his part, spoke with great warmth about the Armenian civilization and culture, about which—in his words—he is well informed owing to his profession.

2017-07-05 13:55:34 On July 4 the enemy continued to breach the ceasefire at the line of contact between the Artsakh-Azerbaijani forces firing mortars of different calibers and at 8:20 pm it used T...
Armenian dad of 5-year-old missing boy smiles and jokes in court

2017-06-28 15:30:23 The father of a 5-year-old Pasadena boy missing since April behaved strangely during the first hearing in court. Aramazd Andressian Sr. joked and even laughed, talking with the...
Why Jivan Avetisyan’s ‘The Last Inhabitant’ Should be Armenia’s Entry to Oscars

2016-08-27 17:25:26 The Academy of Armenia for films is facing a crucial decision come September 3. Who will the Academy nominate as the official entry for the 89th Academy Awards to represent Arme...
Newsfeed