This image of a three-year-old girl being abducted has been widely shared across Chinese social media. 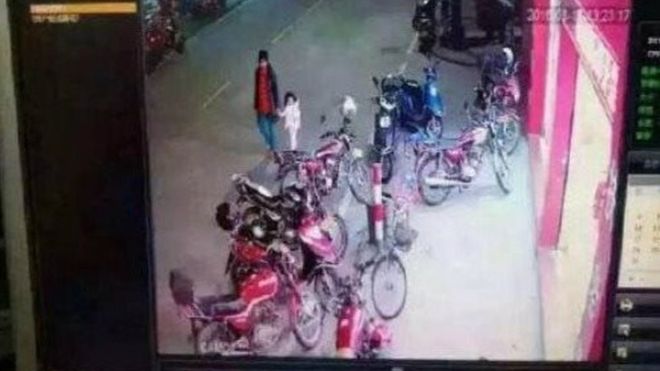 This image of a three-year-old girl being abducted has been widely shared across Chinese social media.The girl has now been found, but the search sheds light on the country's huge digital campaigns trying to track down tens of thousands of missing children and return them to their parents.

The screengrab from a security camera video went viral last week after it was released by police and published on Weibo, China's answer to Twitter. It shows a woman strolling hand in hand with a young girl - but the woman is not her mother.

The girl had been out walking with her grandfather in Guangdong, in southern China, when a woman approached the pair asking for something to eat. When the grandfather obliged, and went to buy her some food nearby, the woman took the child's hand and disappeared.

"I couldn't find [my granddaughter] and felt like I wanted to throw myself in a river," he later told a Chinese reporter.

When the photo of the abduction appeared the reaction was a mixture of alarm and fury - but few expressed surprise.

2016-01-29 12:28:17 Take a journey through six decades of Honda innovation as multiple animators manipulate thousands of hand-drawn illustrations.
Oral sex 'raises the risk of getting cancer by 22 times'