Fire at hotel in Iraqi city of Erbil

A fire broke out today In Erbil, the capital of Iraqi Kurdistan, the TV channel Al-Sumari reports. 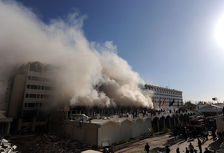 A fire broke out today In Erbil, the capital of Iraqi Kurdistan, the TV channel Al-Sumari reports.

According to Iraqi mass media, 17 people were killed. The majority of the victims were foreigners staying at the hotel, Tass reports.

According to the mayor of the city of Erbil, Nawzad Hadi, the nationalities of the victims are not known. Other details are being determined now.

2016-02-06 12:12:20 Manchester United have refused to comment on reports that the club have held talks with representatives of José Mourinho, with the former Chelsea manager said to be incre...
The thought of today

2016-02-06 11:53:29 Millions of people have decided not to be sensitive. They have grown thick skins around themselves just to avoid being hurt by anybody. But it is at great cost. Nobody can hurt ...
Moscow photo enthusiasts get to know about beauties of Georgia

2016-02-06 11:41:53 A personal exhibition dedicated to Georgia by the photographer and member of the Russian Photographers Union, Margarita Fedina, started today at Moscow's Turgenev Library. Marg...
Newsfeed