The fire which engulfed one of Dubai's most prominent hotel skyscrapers ahead of New Year fireworks was caused by an electrical short-circuit, Dubai's police chief said on Wednesday. 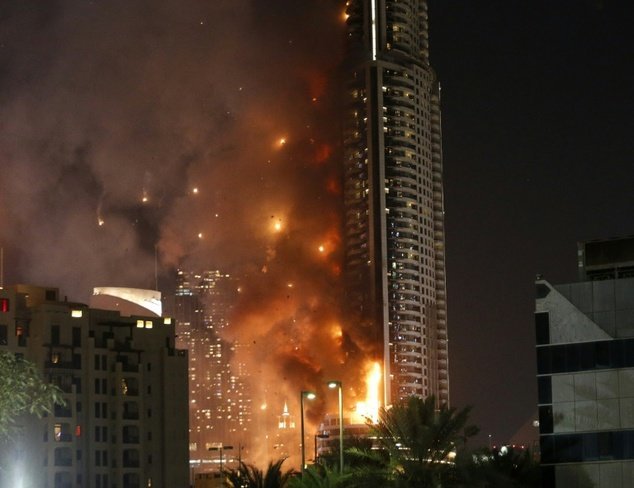 The fire which engulfed one of Dubai's most prominent hotel skyscrapers ahead of New Year fireworks was caused by an electrical short-circuit, Dubai's police chief said on Wednesday.

In a presentation to media, police officials said there had been no trace of any flammable liquids such as petrol at the site of the blaze at the 63-storey hotel and residential block, close to the world's tallest building. "The direct cause was an electrical short-circuit," police commander Khamis Mattar Al-Mazeina told reporters. He declined to say whether the cladding - layers fixed to the outside of buildings for decoration, insulation or protection - had affected the development of the fire, and directed queries about building materials to the Dubai Civil Defence authority.

The building was quickly evacuated with only minor injuries reported, and authorities went ahead with a New Year's fireworks display at the 160-storey Burj Khalifa tower a few hundred metres away.

Flames shot skywards from one side of the luxury Address Downtown Dubai, owned by developer Emaar Properties which stands across a plaza from the Burj Khalifa tower where people had gathered for the fireworks show.

In a statement, Dubai police said the short-circuit which caused the fire occurred in an area between the 14th and 15th floors of the hotel at around 21.25 local time.