Armenians will always live in Jerusalem 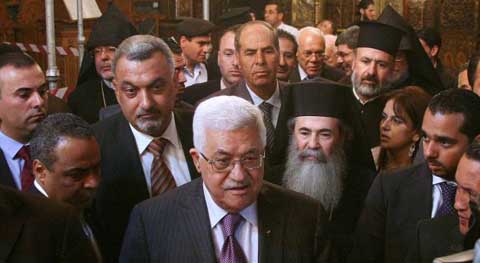 Palestinian President Mahmoud Abbas Monday, January 18 joined Christmas celebrations according to Armenian Calendar and said Christians of Palestine are “the salt of this land and will never leave,” Massis Post reports citing WAFA.

He said, during a reception ceremony held by the Armenian community on the occasion of Christmas in the Church of Nativity in Bethlehem, that individuals who call to get rid of Christians especially Armenians should “eat their hearts out because Armenians will always remain in Jerusalem, Ramallah, and Bethlehem.”

President Abbas also likened the plight of his populace to that of the Armenian victims of the Ottoman Genocide during and after WWI.

Following is a part of the text of the speech by PA President:
“We would like to convey our best wishes to our beloved Armenian brothers in Palestine, in Armenia and in the entire world. We hope that the upcoming days would bestow us with goodness and love.

We have sent a letter to His Excellency the Armenian President [Serzh] Sargsyan officially inviting him to visit Palestine and we hope he will accept the invitation.

We share many similarities, and here we are truly one nation. We worship the same God and in the same homeland that we take huge care of. We all stand at the same level, you and us and everyone else. Therefore, when some individuals say it is imperative to get rid of the Christians and especially Armenians, we tell them to eat their hearts out, because Armenians will always remain in Jerusalem, Ramallah and Bethlehem. Christians will always be the salt of this earth and will remain on their land and in their country. Whoever wants them to leave must do that instead.”