A massive blizzard bringing more than 2ft (61cm) of snow and punishing winds is advancing up the US East Coast. 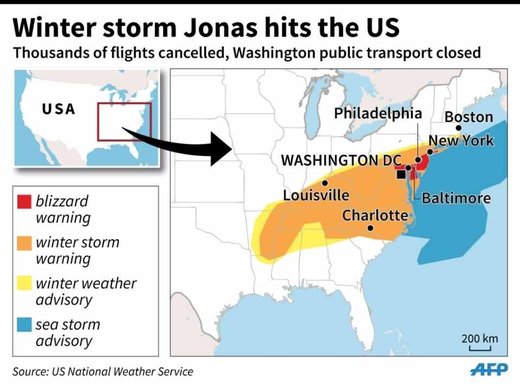 A massive blizzard bringing more than 2ft (61cm) of snow and punishing winds is advancing up the US East Coast.

More than 50 million people across more than a dozen states have been warned to stay at home as it moves north.

The nation's capital, Washington, could lie under a record 30in (76cm) of snow by the time the storm passes on Sunday.

Eight people have been killed, six states have declared states of emergency and thousands of flights have been cancelled.

The weather system affects a huge swathe of the country, from Arkansas in the south to Massachusetts in the north-east.

Supermarkets ran out of food amid a rush for supplies before the first snowflakes fell on Friday.

- More than 6,000 flights have been cancelled for Friday and Saturday
- The US federal government closed down at noon on Friday
- President Barack Obama is remain at the White House, officials said
- States of emergency declared in Tennessee, North Carolina, Virginia, Maryland, Pennsylvania, the District of Columbia and parts of other states
- Eight people have been killed in car crashes in Tennessee, North Carolina, Kentucky and elsewhere

Washington's transport system - the second busiest in the US - will close all weekend
Many events, including two sold-out concerts by singer Garth Brooks in Baltimore, have been postponed

Washington's mayor, Muriel Bowser, said this was a major storm with "life and death implications".

On Friday afternoon, as the first snow fell in Washington, the National Weather Service said it could be one of the worst storms in the city's history.

Residents in the capital and surrounding suburbs in Virginia and Maryland have been warned the snowfall could eclipse the district's record of 28in that fell during a two-day period in 1922.

Catholics in Washington, Baltimore, and Delaware were told by archdiocese officials that missing Mass this Sunday was excusable given the terrible conditions.

Supermarket shelves in many areas were laid bare. In Baltimore, shopper Sharon Brewington remembered how she and her daughter were left with just noodles and water when the last big snowstorm struck in 2010.

"I'm not going to make that mistake again," she said.

National Weather Service director Louis Uccellini said the system had "the potential of being an extremely dangerous storm that could affect over 50 million people".