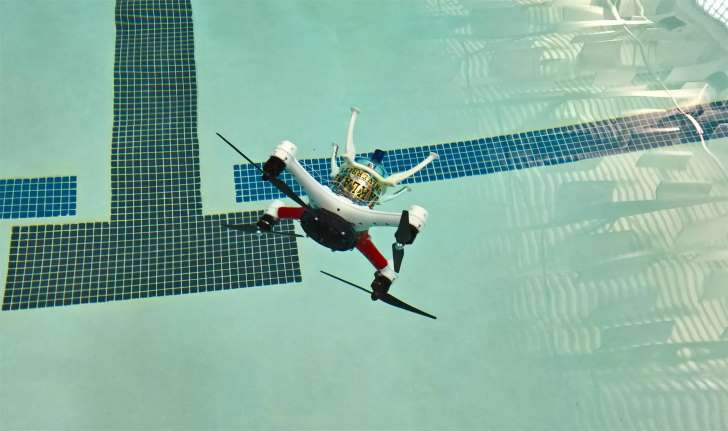 In the future, there will be no escape from robotic observation. Proof (if proof were needed) comes in the form of Loon Copter, a drone developed by Oakland University's Embedded Systems Research Laboratory that can not only fly, but also land on and even navigate under the water's surface. The Loon Copter project has been around a while, but this latest prototype is much more polished, and a semifinalist in the 2016 Drones for Good competition.

At a glance, the Loon Copter looks much like a conventional quadcopter, just with a taller, barrel-like body. The drone can land and float on water, much like other craft, but its party trick is the ability to fill its buoyancy chamber, causing it to safely sink to a few meters beneath the surface. The clever design causes the Loon to tilt 90 degrees in the water, so that its propellors act like outboard motors, letting it navigate the (not very deep) blue like other subaquatic robots. When the water is released, the Loon floats back to the surface, at which point it can take to the skies again.

Of course, the official line is that these multi-talented drones could help with search and rescue operations, or underwater engineering inspections. But, even that has a few challenges right now. Currently transmitting live video back to a console above ground isn't possible, so video has to be recorded for playback later. Future versions of the Loon Copter could use acoustic modems or repeater buoys to allow for live streaming, avoiding the need for a tether. Now if they could just make it a little bigger, we'd have the ultimate adventure vehicle.