All 22 players sit in silence before AEL Larissa versus Acharnaikos 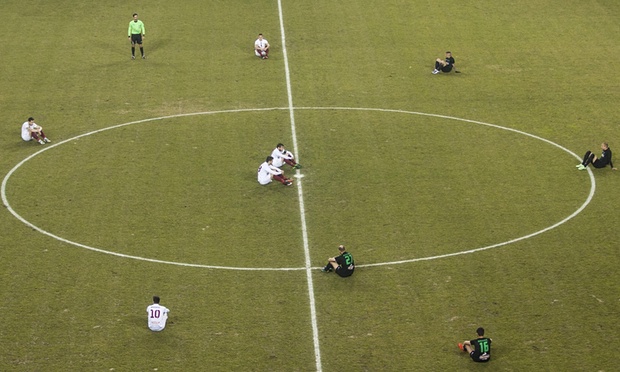 A Greek second-tier league match was delayed on Friday when players staged a sit-down protest against the death toll of migrants trying to reach the Aegean islands.

As the match kicked off all 22 players plus coaches and substitutes sat in silence for two minutes in a show of respect to the hundreds of refugees who have lost their lives trying to escape conflict or persecution in countries such as Syria and Iraq.

An announcement over the club’s PA system stated: “The administration of AEL, the coaches and the players will observe two minutes of silence just after the start of the match in memory of the hundreds of children who continue to lose their lives every day in the Aegean due to the brutal indifference of the EU and Turkey.

“The players of AEL will protest by sitting down for two minutes in an effort to drive the authorities to mobilise all those who seem to have been desensitised to the heinous crimes that are being perpetrated in the Aegean.”

Greece became the main gateway for refugees who began arriving in Europe last year, many undertaking hazardous sea crossings in small craft. Five children were among at least 33 migrants who drowned in the Aegean Sea after their boat capsized on Saturday as they attempted the crossing from Turkey to Greece.

The gesture came 24 hours after it was announced by the International Olympic Committee that the flame for the 2016 Olympic Games in Rio de Janeiro will pass through the Eleonas refugee camp in Athens, and one refugee will be among the torch bearers.