The White House Should Answer 10 Key Questions on Artsakh 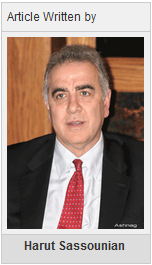 For many years, the Armenian-American community has been dissatisfied with United States policy on Artsakh (Nagorno Karabagh).

Under the guise of neutrality, OSCE Minsk Group Co-Chair James Warlick and his predecessors have put the blame on both sides of the conflict each time that Azerbaijan has opened fire on Armenia and Artsakh. Such an unfair approach has encouraged Pres. Aliyev to escalate his attacks.

To eliminate or at least minimize such bloody aggression, 85 members of Congress recently signed a joint letter urging the Obama Administration to implement the following three steps regarding the border between the two countries: 1) withdraw the snipers; 2) increase the number of international monitors; and 3) deploy gunfire locators. Not surprisingly, Azerbaijan has rejected all three proposals, while Armenia, Artsakh, and the Minsk Group of mediators (France, Russia, and United States) have accepted them.

Last week, House Foreign Affairs Committee Chairman Ed Royce held a classified briefing with Amb. Warlick concerning the implementation of the proposals which he and Cong. Eliot Engel had initiated. Before the closed-door meeting, the Armenian National Committee of America (ANCA) had circulated a set of 10 suggested questions for Amb. Warlick. While it is not known if these questions were raised during the congressional briefing, the Obama Administration should be asked to respond publicly to the 10 questions so that everyone becomes aware of its position on the Artsakh conflict.

To ensure that an official answer is received, I suggest the posting of these questions on the White House website, under the “Petitions” section. The website states that the Obama Administration will issue a formal response in 60 days to any petition that gathers over 100,000 signatures within 30 days of its posting. Azeris have already taken advantage of this unique opportunity by posting on the White House website two anti-Armenian petitions which gathered 105,686 and 126,828 signatures respectively. As expected, the White House did issue a statement in response to the two Azeri petitions.

Below are the 10 ANCA questions which should be posted as a petition on the White House website:
1) What specific steps, if any, has the U.S. government taken to ensure the implementation of the Royce-Engel peace proposals, specifically with regard to an agreement on the non-deployment of snipers, the addition of observers, and the deployment of gunfire locator systems along the line of contact?
2) The State Department has been both very vocal and highly specific about what it believes the Armenian side must concede. Is the U.S. government willing to match this public diplomacy with equally high-profile and similarly concrete demands upon Azerbaijan?
3) What are the specific facts, legal arguments, and policy considerations that led our government to officially recognize Kosovo but not Nagorno Karabakh?
4) Does the Azerbaijani government’s record of domestic repression and corruption in any way impact how our government views Azerbaijan’s claim to extend its governance over Nagorno Karabakh?
5) Why has Azerbaijan’s well documented (and video-taped) destruction of the medieval Armenian Cemetery in Djulfa never been mentioned in either the State Department’s Human Rights or Religious Freedom reports?
6) What is the U.S. government’s current request, if any, regarding the re-incarceration of admitted and still unrepentant axe-murderer Ramil Safarov?
7) What is the U.S. policy concerning the Azerbaijani government’s travel restrictions related to U.S. citizens of Armenian heritage?
8) What is the U.S. policy regarding NATO member states, notably Turkey, making sales or transfers of advanced, offensive weaponry to Azerbaijan?
9) What specific restrictions exist regarding travel and communication between the citizens and officials of the United States and Nagorno Karabakh? What are the justifications for any such restrictions of these freedoms? What, if any, are the perceived benefits of such restrictions?
10) What interests do you believe have been served, if any, by official U.S. public restraint in challenging Azerbaijan’s high-profile anti-Armenian incitements, threats, and cross-border aggression?

I believe that a well-publicized petition can gather much more than 100,000 signatures within 30 days of its posting on the White House website, particularly if prominent individuals with a large number of followers endorse the petition.

2017-04-25 19:20:21 Armenia’s membership in the Eurasian Economic Union already has a two-year record. What the country has benefited from it? What do experts predict? What programs are plann...
The European Parliament recognizes ISIS's systematic killing in the Middle East ...

2016-02-06 15:11:20 The European Parliament unanimously passed a resolution on Thursday recognizing the Islamic State militant group’s (ISIS) systematic killing and persecution of religious m...
No Talks With PKK Before It Lays Down Arms

2016-02-05 11:17:28 Unexpected Encounters: Armenians in Burma. By: Noeme Chahenian Myanmar is not the first destination that comes to mind while planning a vacation. It does not have the breathta...
Brazil Zika virus: 'War' declared on deadly mosquitoes

2016-02-04 11:32:01 Brazilian President Dilma Rousseff has declared war on mosquitoes responsible for spreading the Zika virus in a recorded TV message to the nation. She said a national mobilisat...
Talaat’s Last Interview Before his Assassination