16:46 Ameriabank wins Best Bank in Sustainable Finance award for 2022 13:24 Ameriabank awarded with TFP Prize for Deal of the Year 2021: Green Trade by EBRD 14:02 Global Finance names Ameriabank Best Bank in Armenia in 2022 14:45 Ameriabank’s ‘Live Armenian,’ ‘Live with a Smile,’ ‘Live Limitless’ promotional draws’ winners are announced 15:45 Global Finance Names Ameriabank “Best Investment Bank” in Armenia 10:44 Ameriabank receives another IFC award in trade-finance sector 11:50 Ameriabank is the first in Armenia to place green bonds via public offering 11:46 "You can create systems, but they must be based on people, be people-centered," says Lindsey Forbes, Ameriabank Board Member 17:01 Ameriabank is the largest taxpayer among Armenian banks according to results of year 2021 17:08 EBRD and donors increase funding for SMEs in Armenia
15:11 - 6/February/2016 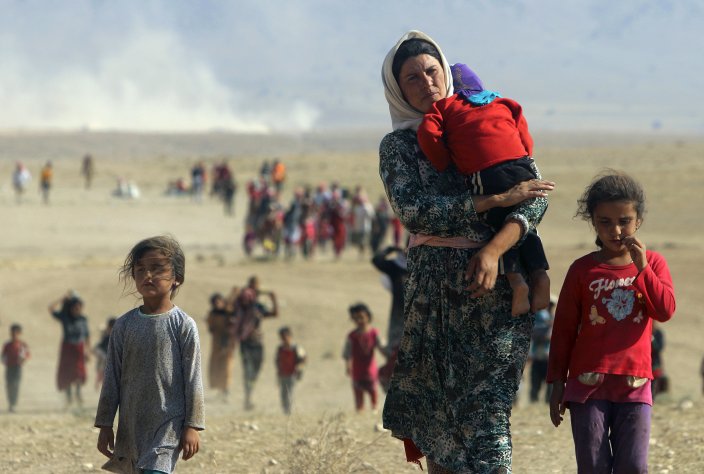 The European Parliament unanimously passed a resolution on Thursday recognizing the Islamic State militant group’s (ISIS) systematic killing and persecution of religious minorities in the Middle East as a genocide.

The vote, decided by a show of hands at a European Parliament plenary session in the French city of Strasbourg, was the first time the body has recognized an ongoing conflict situation as a genocide. The resolution states that those who intentionally commit atrocities for ethnic or religious reasons should be brought to justice for violations against international law, crimes against humanity, and genocide.

ISIS has systematically persecuted religious minorities in its self-proclaimed caliphate in Iraq and Syria, kidnapping hundreds of Assyrian Christians in Syria, forcing Christians to live under its radical strand of Islam in the central Syrian city of Al-Qaryatain, enslaving and raping Yazidi women and children in northern Iraq, as well as killing Yazidi men and dumping them in mass graves.

Lars Adaktusson, Swedish member of the European Parliament for the European People’s Party (Christian Democrats) Group, who tabled the resolution, calls the vote a “historic decision” that represents a further step towards recognition of ISIS crimes against Christians, Yazidis and other religious minorities at the United Nations.

“It’s really important that the Parliament passed it, on a political level and a moral level. The significance is the obligations that follow by such a recognition,” he says, speaking to Newsweek by phone. “The collective obligation to intervene, to stop these atrocities and to stop the persecution in the ongoing discussion about the fight against the Islamic State.”

He adds: “It gives the victims of the atrocities a chance to get their human dignity restored. It’s also a historical confirmation that the European Parliament recognized what is going on and that they are suffering from the most despicable crime in the world, namely genocide.”

The radical Islamist group views Yazidis as devil-worshippers and Christians as kafir (disbelievers) and infidels. In 2014, ISIS captured Iraq’s largest Christian town, Qaraqosh, forcing tens of thousands to flee, also seizing the Christian towns of Tal Kayf, Bartella and Karamlesh. In their takeover of the Iraqi city of Mosul, churches and Christian shops were attacked and the group forced the Christian population of 3,000 to flee or be killed unless they converted to Islam or paid jizya (a tax paid by non-Muslims).

Nuri Kino, the director and founder of the Middle Eastern advocacy group A Demand for Action, who also led the push for the genocide to be recognized with Adaktusson, tells Newsweek that the passing of the resolution will help to save lives in the Middle East.

“It’s overwhelming. Eighteen months ago we said we will demand action. Today, we can say with pride that we, a team of volunteers from all over the world, worked around the clock to make this happen.”

He adds: “Now our goal is the U.N. Security Council. Action must be taken.”

The insecurity faced by Christians in the Middle East has seen their population decrease drastically in recent years. As of July 2015, a third of Syria’s 600,000 Christians had fled; Lebanon’s Christian population share has shrunk from 78 percent to 34 percent over the previous century; and only a third of the 1.5 million Christians who lived in Iraq in 2003 remain today, according to the New York Times.

2017-04-25 19:20:21 Armenia’s membership in the Eurasian Economic Union already has a two-year record. What the country has benefited from it? What do experts predict? What programs are plann...
No Talks With PKK Before It Lays Down Arms

2016-02-05 11:17:28 Unexpected Encounters: Armenians in Burma. By: Noeme Chahenian Myanmar is not the first destination that comes to mind while planning a vacation. It does not have the breathta...
Brazil Zika virus: 'War' declared on deadly mosquitoes

2016-02-04 11:32:01 Brazilian President Dilma Rousseff has declared war on mosquitoes responsible for spreading the Zika virus in a recorded TV message to the nation. She said a national mobilisat...
The White House Should Answer 10 Key Questions on Artsakh

2016-02-03 15:46:46 Article written by Harout Sasounian For many years, the Armenian-American community has been dissatisfied with United States policy on Artsakh (Nagorno Karabagh). Under the gu...
Talaat’s Last Interview Before his Assassination