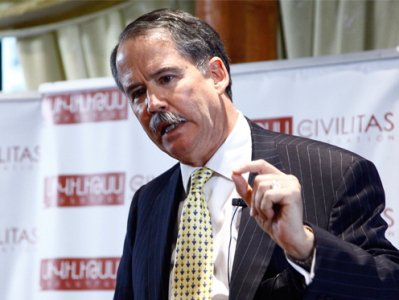 Armenian Genocide commemoration event was held at the Armenian Heritage Park on Sunday.

“Ninety years after the event our government cannot bring itself to look in its own archives and face the fact that our ally in NATO or at least certain people in that country had an intent to destroy the Armenian people. You deserve the truth, all American citizens deserve the truth,” the diplomat said addressing Armenians.

Evans added that impulse to kill people for their ethnicity or religion is very much alive, as evidenced by persecution of Yazidis in Syria and Christians, including Armenians and Assyrians, in the Middle East.

“When will this end? We have to ask ourselves that question; part of an answer has to be telling the truth about what happened before. Let’s pledge today to do everything each of us can to make our future one when the genocide will be no longer a part of human existence,” Evans added.