16:46 Ameriabank wins Best Bank in Sustainable Finance award for 2022 13:24 Ameriabank awarded with TFP Prize for Deal of the Year 2021: Green Trade by EBRD 14:02 Global Finance names Ameriabank Best Bank in Armenia in 2022 14:45 Ameriabank’s ‘Live Armenian,’ ‘Live with a Smile,’ ‘Live Limitless’ promotional draws’ winners are announced 15:45 Global Finance Names Ameriabank “Best Investment Bank” in Armenia 10:44 Ameriabank receives another IFC award in trade-finance sector 11:50 Ameriabank is the first in Armenia to place green bonds via public offering 11:46 "You can create systems, but they must be based on people, be people-centered," says Lindsey Forbes, Ameriabank Board Member 17:01 Ameriabank is the largest taxpayer among Armenian banks according to results of year 2021 17:08 EBRD and donors increase funding for SMEs in Armenia
10:56 - 25/April/2017

The visit agenda of the Iranian official also features a meeting with the lecturers and students staff of Yerevan State University and a visit to Mesrop Mashtots Institute of Ancient Manuscripts (Matenadaran). 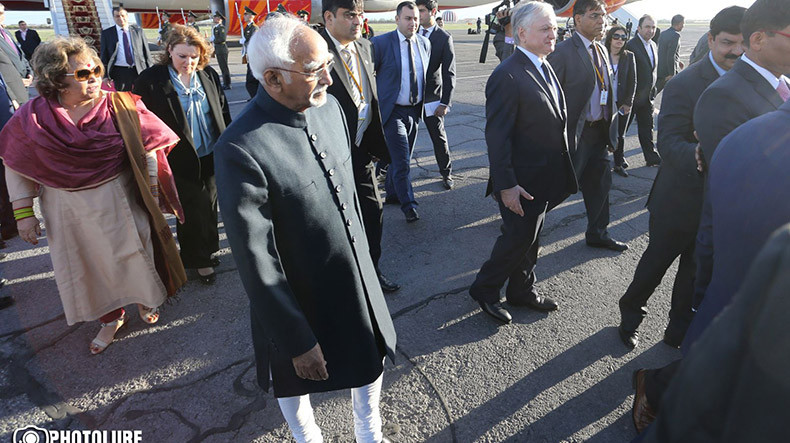 Vice President of India Hamid Ansari has arrived in Armenia on official visit. He has been welcomed by Armenia’s Foreign Minister Edward Nalbandian at Zvartnots International Airport.

To note, in the framework of the three-day official visit, India’s Vice President is due to hold meetings with President Serzh Sargsyan, Prime Minister Karen Karapetyan and Foreign Minister Edward Nalbandian.

He will also pay a visit to Tsitsernakaberd Memorial Complex to pay tribute to the memory of the Armenian Genocide victims. The visit agenda of the Iranian official also features a meeting with the lecturers and students staff of Yerevan State University and a visit to Mesrop Mashtots Institute of Ancient Manuscripts (Matenadaran).

2017-07-14 17:50:04 The President of Armenia, Serzh Sargsyan, on Friday reflected on trade and economic relations between Armenia and the US. The Ambassador of Armenia to the US, Grigor Hovhanniss...
Azerbaijani Side May've Killed Civilians and Blames Armenians: Spokesperson for ...

2017-07-06 16:43:01 The spokesperson for the President of Artsakh Davit Babayan does not rule out that the Azerbaijani side has killed civilian people to use this against Armenians. He told this to...
French President Learned About Current Status of Conflict Over Karabakh

2017-06-14 17:12:39 The French president Emmanuel Macron has learned about the situation of the conflict over Nagorno-Karabakh, the French co-chair of the Minsk Group Stefan Visconti stated at the ...
Closed screening of Armenian Genocide movie, The Promise, is held in Yerevan (Vi...

2017-04-25 17:45:22 The closed screening—and with Armenian voiceover—of The Promise, a movie about Armenian Genocide, was held in Armenia’s capital city of Yerevan on Sunday, the ...
Artsakh president vows to keep school-building processes in spotlight

2017-04-25 11:19:34 Artsakh Republic President Bako Sahakyan visited today the Martouni region. As the Information Department of the President’s Office reported, in the regional center of Mar...
We will very actively run in Armenia local elections

2016-02-05 12:37:23 All white on the night! Debutantes dazzle as they are introduced into society at the Vienna Opera Ball, while Brooke Shields attends as the date of Austrian billionaire Richard ...
Newsfeed