he United States does not object to Armenia’s plans to step up economic cooperation with neighboring Iran following the lifting of international sanctions against Tehran, the U.S. ambassador in Yerevan, Richard Mills, said on Friday. 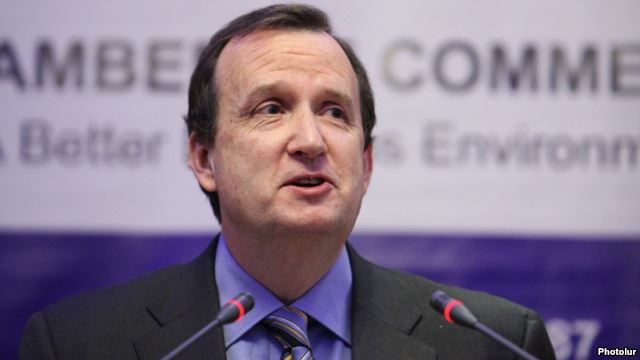 The United States does not object to Armenia’s plans to step up economic cooperation with neighboring Iran following the lifting of international sanctions against Tehran, the U.S. ambassador in Yerevan, Richard Mills, said on Friday.

“Armenia has the sovereign right to pursue strong, mutually beneficial relations with as many nations as it wishes,” Mills said in written comments to RFE/RL’s Armenian service (Azatutyun.am).

“With respect to Iran, the U.S. Government gratefully acknowledges the part Armenia played in making possible the diplomatic engagement that led to the Joint Comprehensive Plan of Action, by fully respecting the international community’s sanctions on Iran over the years, even when that effort came at some cost to Armenia and its economy,” he said, referring to Iran’s nuclear deal with the U.S. and other world powers.

“With the advent of Implementation Day on January 16, it is natural for Armenia to start thinking about the impact that the lifting of sanctions might have on its political and economic ties with Iran,” added the diplomat.

Asked whether the U.S. believes closer ties with Iran could help to ease Armenia’s heavy dependence on Russia for energy resources, Mills said: “We have long encouraged Armenia to diversify its energy supply, including exploring opportunities for alternative/renewable sources and greater regional integration, for the sake of greater energy efficiency and to avoid overdependence on any one party or source.”

Armenia was quick to welcome the July 2015 agreement on Iran’s controversial nuclear program and the resulting sanctions relief. Senior Armenian officials have said the landmark deal will speed up the implementation of Armenian-Iranian energy projects regarded as strategically important by Yerevan.

The two neighboring states already signed in August last year a final agreement on the construction of a new power transmission line which is due to significantly boost exports of Armenian electricity to Iran.

Yerevan hopes that greater oil revenues and the unfreezing of its assets in the U.S. and Europe will also enable Iran to finance the construction of a major hydroelectric plant on the Armenian-Iranian border. The $350 million project has for years been stalled due to a lack of funding and serious restrictions on Armenian banking operations with Iran.